The Geniuses Behind NOW WHAT?!

This week's guest blog is by Barbara Hawkins.

I am so looking forward to seeing the new stage production about adult ADHD called Now What?! with Rick Green and Patrick McKenna. These two popular Canadian actors/comedians have created a new show to dispel the myths and misinformation about adult ADHD. No small accomplishment if it works.

I’ve enjoyed watching McKenna and Green in ADD & Loving It?! on PBS more than once. The popular documentary has likely done more for people affected by ADHD and their families than a lot of other “treatments.” What I am really excited about, however, is that this new show is a stage production, not a documentary. That means live on-stage performances that include skits and interactive exercises in which the audience actually gets to participate. It’s kind of like an entertaining therapy session with no doctor’s bill afterward! 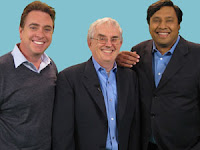 Rick and Patrick have themselves long been diagnosed with ADHD. That’s the reason why their production should be something special, because everything in the show is influenced by their personal experiences. They are joined onstage by Dr. Umesh Jain, or Dr. J as he is known, internationally recognized in the field of ADHD.

Dr. J can boast some major career accomplishments, with over 50 peer reviewed papers and book chapters, 90 peer-reviewed posters, invited lectures and workshops and over 300 presentations. He’s the perfect straight man to the comic characters portrayed by McKenna and Green. Dr. J has joined with Rick on TotallyADD.com in an effort to take ADHD into the mainstream and get people talking about ADHD with facts and certainty rather than drama, fear, and misinformation.

Rick Green has made hundreds of innovative television, radio, and stage shows including History Bites, The Red Green Show, Prisoners of Gravity and The Frantics. I think his greatest roles are the ones he plays in ADD & Loving It?! and in the Now What?! production.

To quote Rick, “Everything I used to know about ADD was wrong. Getting a proper diagnosis and treatment was transformational; like losing 400 pounds, only from the mind rather than the body. I was more productive with far less wear and tear on my soul. Everyone deserves to have this feeling of being in charge of their lives, rather than being a confused victim of mysterious whims. It’s possible.”

For a long time Rick managed his ADD in an “ADD kind of way”—sporadically and only when it reached a crisis. God bless television deadlines. The more roles Rick took on (producer, director, actor, writer, teacher, and father), the more he took on his ADD—and the more surprised he was at the amount of stigma, misinformation, and vitriolic opinion masquerading as fact. Knowing the power that understanding makes in addressing this syndrome, Rick created ADD and Loving It?!

While it may seem odd for a comedian to be doing something quasi-educational, Rick actually has a Bachelor of Science Degree in Physics, which he barely earned in his three years at the University of Waterloo. (That didn’t stop the university from naming Rick one of their Top 50 Graduates of the First 50 Years!) Rick’s first job was teaching at the Ontario Science Centre where he ran demonstrations, wrote and produced science-themed plays, developed exhibits, and set his hand on fire with a 40-foot-long, 1000 watt laser. OMG!

What about Patrick McKenna? He spent most of his life trying to hide what he suspected was ADHD. As a child, he was chastised for doing badly at school and didn't feel very good about himself.

Still, he is one of the fortunate ones who came through the tough times. Today, Patrick has a very happy, successful life—his career as an actor and comedian feeds into his ADHD-fueled needs. To quote Patrick, “I always craved something new and exciting, and all the scripts, characters I played, and bright lights fulfilled that desire.”

Now What?! is scheduled for two performances (1:00 and 6:30 pm) at the University of Maryland’s Clarice Smith Performing Arts Center, Dekelboum Concert Hall on the College Park, Maryland campus on June 12. For information visit the CHADD website and for ticket ordering, click here.


Barbara Hawkins, president-elect of CHADD, is the former coordinator of CHADD of Greater Baltimore and a recipient of the CHADD Volunteer of the Year Award. Hawkins is assistant dean of Villa Julie College in Stevenson, Maryland, and chair of the Children’s Mental Health Conference in Baltimore.
Posted by The ADHD Blog at 1:09 PM

Who's that in my Montgomery County Gazette? Rick Green and Patrick McKenna? Surely not. Surely not the host of Prisoners of Gravity and Red's foil. Patrick's grown a beard and Rick seems to have developed a Zucker Bros-style drinking problem, but after a double-take I was sure it was you. What a great surprise to see you, gentlemen. All the best for your new show. With the two of you together, it will be no lightweight production. Seeing you again, your pictures in a newspaper, it's like I never left the GTA. (Thanks for getting me through high-school, Rick.) Cheers and bonsoir.