Update on the US Senate Effort to Repeal and Replace Obamacare


While CHADD encourages its members to do their own research on the current proposals, we are disseminating the action alert below for those who are interested in making their voices heard in the legislative process. The action alert was prepared by the Mental Health Liaison Group (MHLG), a coalition of which CHADD is a member. The Senate is expected to vote on one of these measures this week, and as early as Tuesday.

What’s next?
Next week, the bill could come up for a vote and pass—unless 3 Republican Senators vote NO.

What to do this weekend (and week of 7/17):
Regardless of whether your Senators are opposed to or supportive of the BCRA, your alerts and social media posts will help emphasize the impact of the bill on people with mental illness.

Note: If you live in a state with Senators who are considered moveable, please put extra effort into reaching out (Alaska, Nevada, W. Virginia, Ohio, Louisiana, Kansas and Arizona). 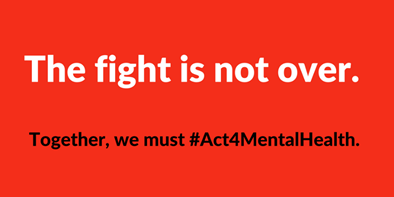 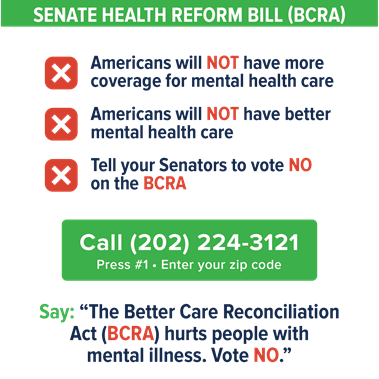 Subject line: This bill hurts.
Text: The Senate delayed a vote on the Better Care Reconciliation Act (BCRA), but they are back at it—and they are moving fast. A vote could happen any day.
They have revised the bill and it isn’t better, it’s worse.
New language would let insurance companies offer bare-bones plans with no mental health coverage. This is a giant step away from parity, or fair coverage of mental health conditions.
There will still be less financial assistance and fewer protections for people who buy individual health insurance plans through the marketplace.
The bill still cuts and caps the Medicaid program, which will make it harder for people to get psychiatric medications, case management, mental health services—and even hospital care.
Millions will still lose their Medicaid coverage, including 1 in 10 veterans who rely on Medicaid for health and mental health services.
The bottom line: this bill hurts people with mental illness. But, the fight is not over. Together, we are powerful. Together we can #Act4MentalHealth. Tell your Senators to vote NO on the BCRA.
Email now

Facebook post
The Senate has revised the Better Care Reconciliation Act (BCRA) and it isn’t better, it’s worse. The bottom line: this bill hurts people with mental illness. But, the fight is not over. Together, we are powerful. Together we can #Act4MentalHealth. Tell your Senators to vote NO on the BCRA. http://ow.ly/wMIB30dEgF6

Tweets
Oppose any bill that leaves fewer people with mental health care. Together, we must #Act4MentalHealth http://ow.ly/wMIB30dEgF6

We know that the toughest fights are worth it. Tell your Senators no on #BCRA! http://ow.ly/wMIB30dEgF6 #Act4MentalHealth